Muriel Thole, (AKA “The BYU Knitting Lady”), was born September 4, 1925, in Cardiff, South Wales, to very devoted and loving parents. Their family was later joined by two sisters and a brother, making it a warm, and close-knit family.

Though her timing for beginning her life journey was at a very dark period, with the struggle of World War l recovery and wide economic depression, she brought a spark of light wherever she went.

Things became even darker when World War II came to her home city. The Cardiff Docks became a strategic bombing target for the German Luftwaffe. Over the next four years, approximately 2,100 bombs fell, killing 355 people.

It was a terrible time for Muriel as she lived in bomb shelters under blackout restrictions, and heard the whistle of bombs falling, wreaking so much devastation and disruption to her life and homeland. Muriel recounts, “It was frigid, and we only had 20 clothing coupons a year,” she says. “If you bought a coat, you needed 18 coupons.  My mother felt sorry for me but was also a little critical because knitting could help us.

So, Muriel asked for yarn, which was not rationed. “I tried to follow a pattern, stayed up all night, and ended up with a single glove. One finger was several inches long and another was very short. I put it in the garbage, but I persisted. I taught myself how to knit and never looked back.”

Muriel studied at a business school where she learned accounting and office management. Her family received missionaries from the LDS Church, and were converted in 1949. Later, as the first missionary called from Whales, Muriel served a mission in London and Manchester, England.

At the age of 29, Muriel took courage and obtained passage to depart her homeland and family to seek life in America. After a three-and-a-half-week ship ride across the ocean, she arrived at the port of New York City. She then traveled by train to Provo, finding the dry, drought-ravaged town distinctly at odds with her visions of America! She states that she has since grown to love her adoptive state, with its stunning mountains and picturesque scenery.

Shortly after arriving in Utah Valley, Muriel felt fortunate to secure a cashier job in the BYU cashier’s office, earning 90 cents per hour. She was soon promoted to head cashier, a title she held for 34 years. Then, after working another 3 years as the delinquent accounts collection officer, she retired from BYU in 1990. She also served voluntarily, as an elected member of the board of directors for BYU Credit Union for several terms. She filled many Church callings over the years, which included Relief Society president and teacher of many Mutual and Sunday School classes.

Her needles and yarn accompanied her to her first game, and they remained a constant companion. “I love the Cougars” she explains, “but I think I should do something while watching the team.” BYU basketball coach Dave Rose said, “Muriel is one of BYU’s greatest fans. She has traveled all over the world watching and supporting our teams.”

She has been a resident at Summerfield Manor for the past 1 ½ years, and very much enjoys her neighbors there. She very much appreciates the care and support of Summerfield management and the workers who serve to make her life pleasant. 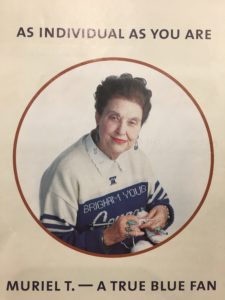 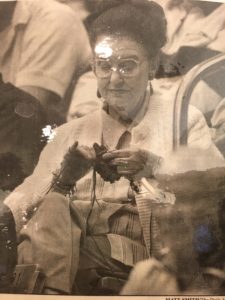